WASHINGTON — The Biden administration’s growing alarm about a potential Russian invasion of Ukraine is based in part on U.S. intelligence that Moscow has drawn up plans for a military offensive involving an estimated 175,000 troops as soon as early next year.

An unclassified U.S. intelligence document details some of the intelligence findings, including the positioning of what officials say could eventually be 100 battalion tactical groups, as well as heavy armor, artillery and other equipment.

The intelligence was first reported on Friday by The Washington Post.

U.S. officials stress that the intentions of President Vladimir V. Putin of Russia remain unclear, and the intelligence does not show that he has decided to carry out the apparent war plan.

But the intelligence depicts a Russian military machine springing into action and positioning itself for an attack against which experts say Ukraine’s military would stand little chance. About half of the Russian forces that would be used in an invasion are already near Ukraine’s border, and Moscow is moving swiftly to build up a large force of contract military reservists, according to a Biden administration official who spoke on the condition of anonymity to discuss sensitive intelligence.

A Russian invasion of Ukraine would set off a major national security crisis for Europe and the Biden administration, which has declared an “ironclad commitment” to Ukraine’s borders and independence.

Mr. Biden, she said, “will underscore U.S. concerns with Russian military activities on the border with Ukraine and reaffirm the United States’ support for the sovereignty and territorial integrity of Ukraine.”

The intelligence document features satellite photos indicating a buildup of Russian troops and equipment near Ukraine’s eastern border, and says that Russian plans involve moving forces to and from Ukraine’s border “to obfuscate intentions and create uncertainty.” 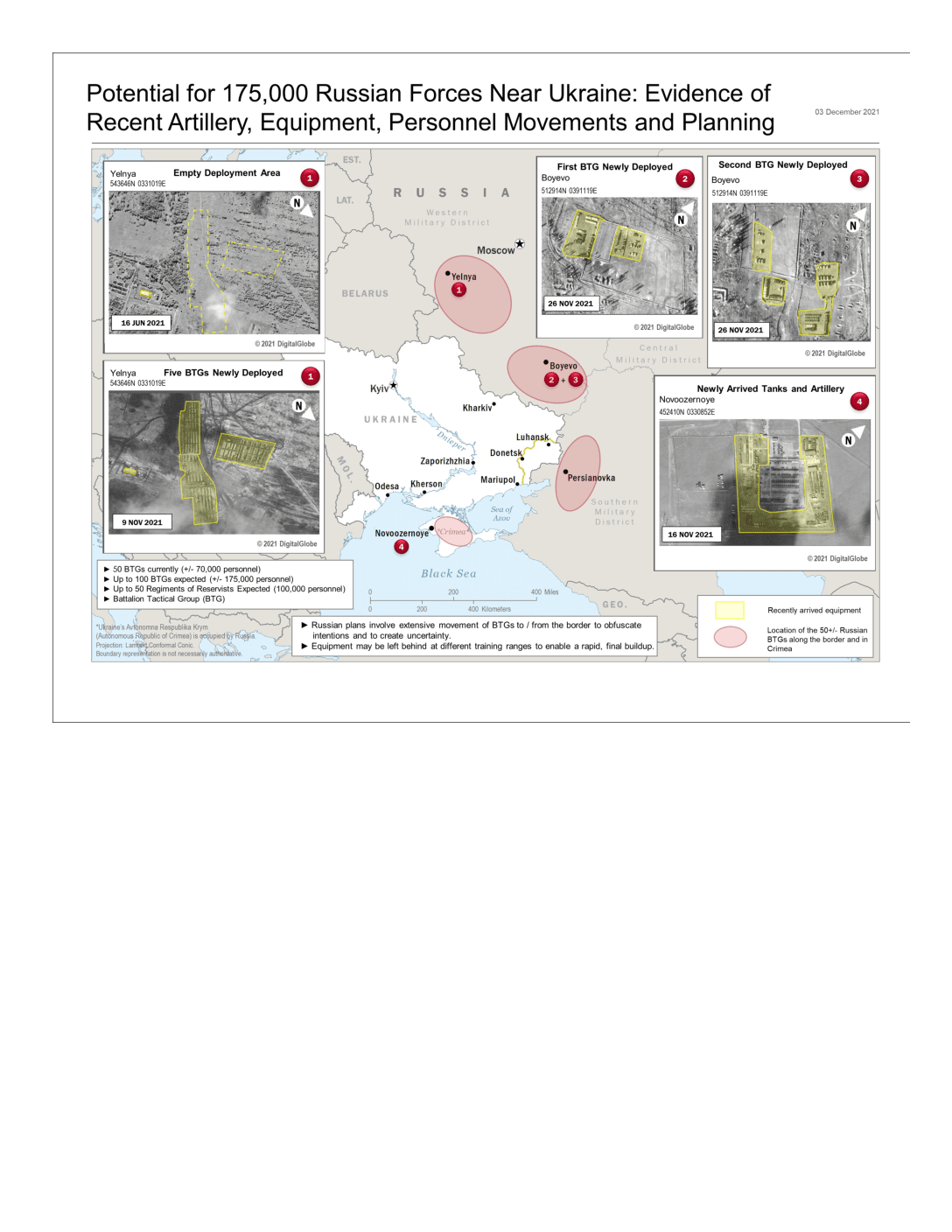 The concern about Mr. Putin’s intentions has been fueled by what U.S. officials call an increase in Russian media disinformation describing NATO and Ukraine as threats to Russia, potentially to create a pretext for a Russian escalation. The administration official said that Russian officials had also proposed information operations within Ukraine portraying that country’s leaders as Western puppets acting against their country’s interests.

“We’ve been aware of Russia’s actions for a long time, and my expectation is we’re going to have a long discussion,” Mr. Biden told reporters Friday night when asked about the possibility of Russia invading Ukraine.

A National Security Council spokesperson said on Friday night that the United States did not seek conflict with Russia and believed diplomacy was the best way to avert a crisis and prevent US.-Russian relations from spiraling further downward.

U.S. officials have hinted vaguely in recent days that they have specific reasons for their heightened concern about an invasion of Russia’s neighbor, a former Soviet republic that Mr. Putin considers a rightful part of Russia.

Understand the Escalating Tensions Over Ukraine

Ominous warnings. Russia called the strike a destabilizing act that violated the cease-fire agreement, raising fears of a new intervention in Ukraine that could draw the United States and Europe into a new phase of the conflict.

The Kremlin’s position. President Vladimir V. Putin of Russia, who has increasingly portrayed NATO’s eastward expansion as an existential threat to his country, said that Moscow’s military buildup was a response to Ukraine’s deepening partnership with the alliance.

Speaking to reporters in Stockholm, Sweden on Thursday, Secretary of State Antony J. Blinken referred to “evidence that Russia has made plans for significant aggressive moves against Ukraine.” Speaking to reporters on his official plane later that day, Gen. Mark A. Milley, the chairman of the Joint Chiefs of Staff, referred to “warnings from an intelligence standpoint,” saying “there’s enough out there now to cause a lot of concern.”

Mr. Blinken and other U.S. officials have been consulting with U.S. allies in Europe to devise retaliatory measures against possible Russian aggression against Ukraine, where Mr. Putin has long backed a pro-Moscow separatist insurgency and in 2014 annexed the Crimean Peninsula.

Mr. Blinken said this week that the United States would respond to “Russian aggression against Ukraine” with “high-impact economic measures that we’ve refrained from taking in the past,” but did not provide more details.

Mr. Blinken conveyed that warning during a Thursday meeting in Stockholm with Russia’s foreign minister, Sergey Lavrov. But it is unclear whether Mr. Putin can be deterred by such threats.

Speaking to reporters after his meeting with Mr. Blinken, Mr. Lavrov seemed to scoff at the threat, noting that the United States has repeatedly sanctioned Russia in new and different ways in recent years.

“There’s always a first time,” Mr. Lavrov said. “There were other sanctions they refrained from taking in the past.”