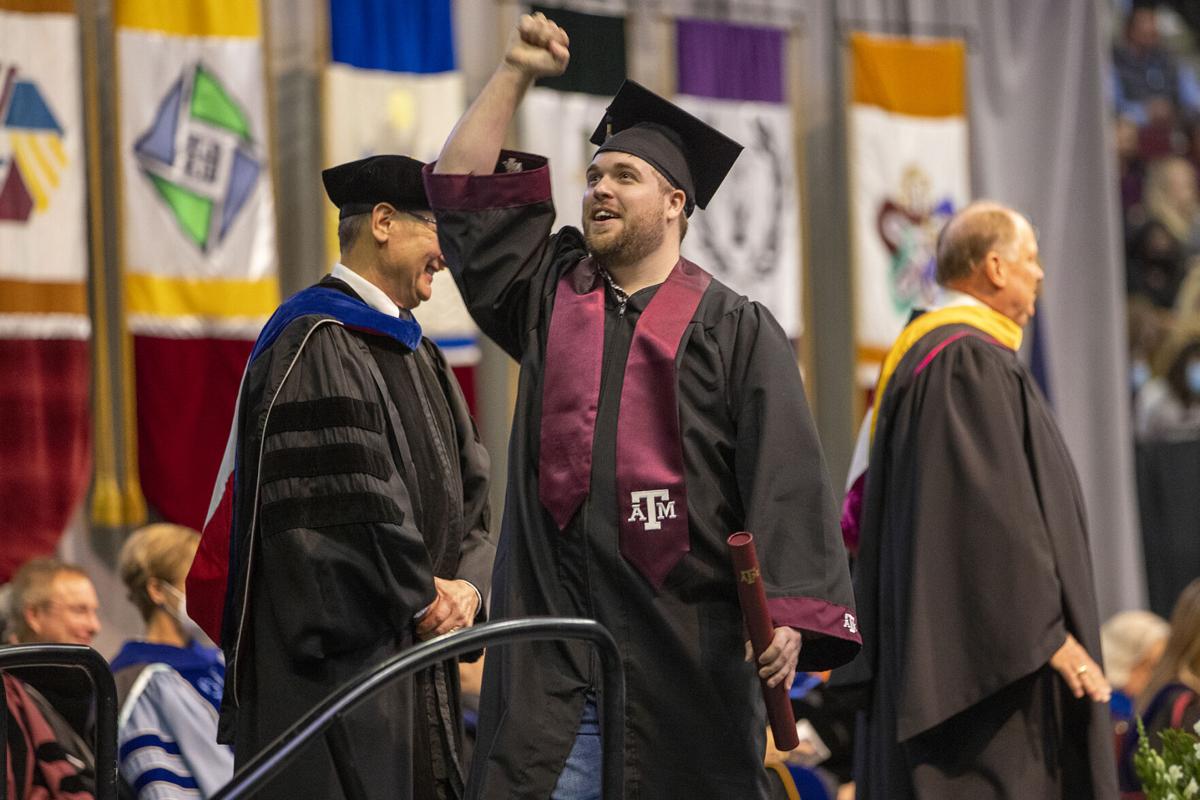 Ryan Oltrogge, graduating with a degree in agricultural leadership and development, celebrates after crossing the stage during a Texas A&M commencement at Reed Arena in College Station on Saturday. 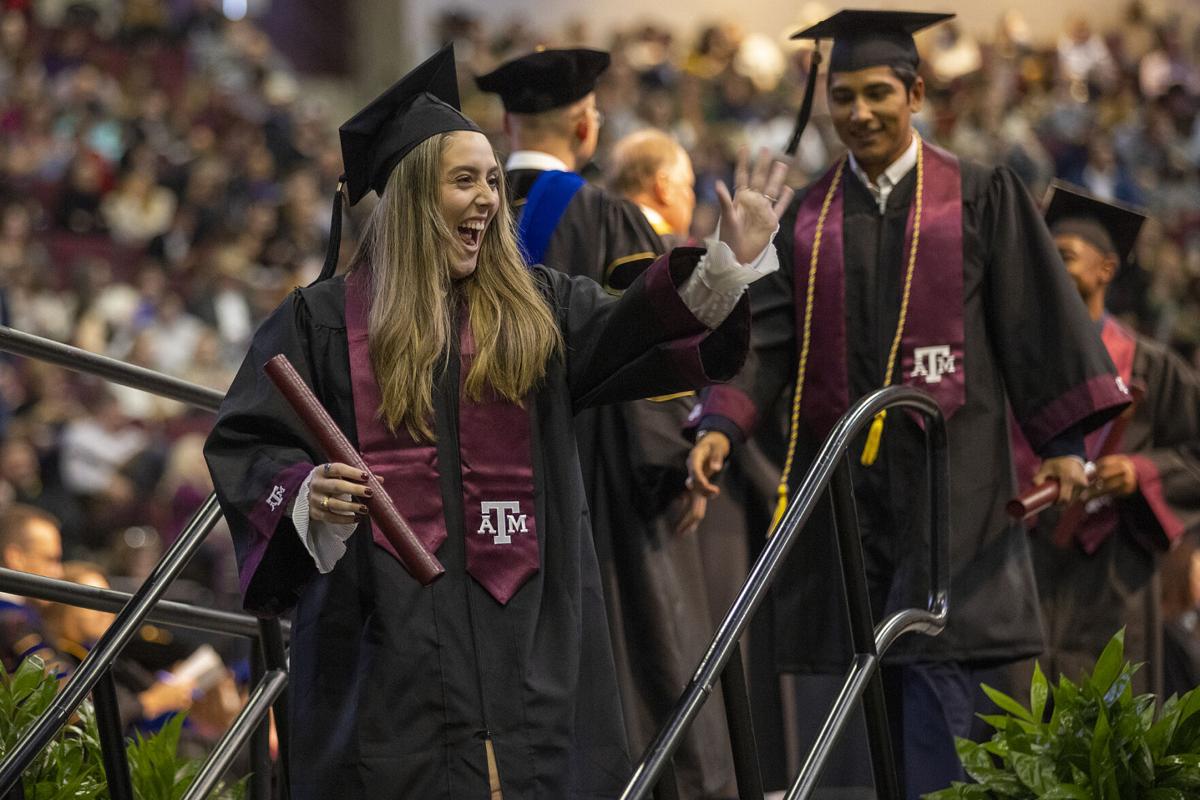 Emiliana Balestrini, graduating with a degree in university studies within environmental business, celebrates after crossing the stage during a Texas A&M commencement at Reed Arena in College Station on Saturday. 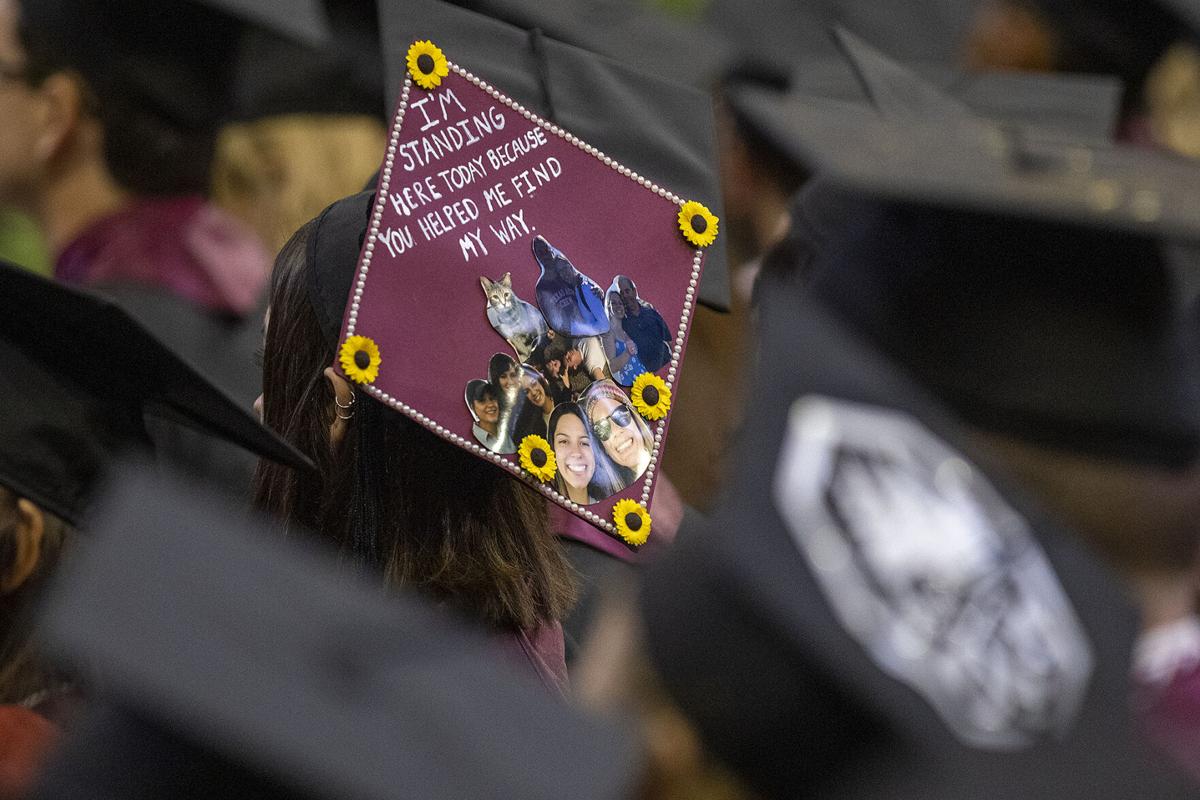 Graduates decorate their caps for a Texas A&M commencement at Reed Arena in College Station on Saturday, Dec. 18, 2021. 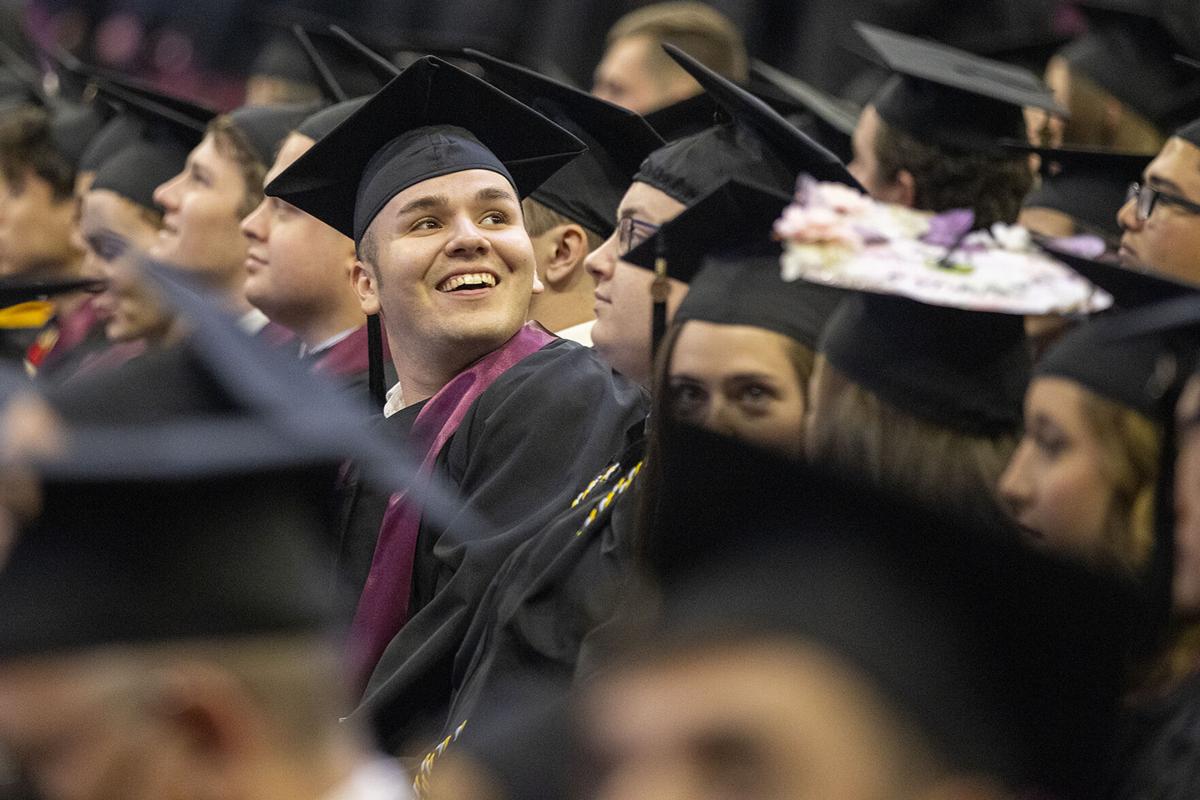 Graduates look to the crowd for family and friends during a Texas A&M commencement at Reed Arena in College Station on Saturday. 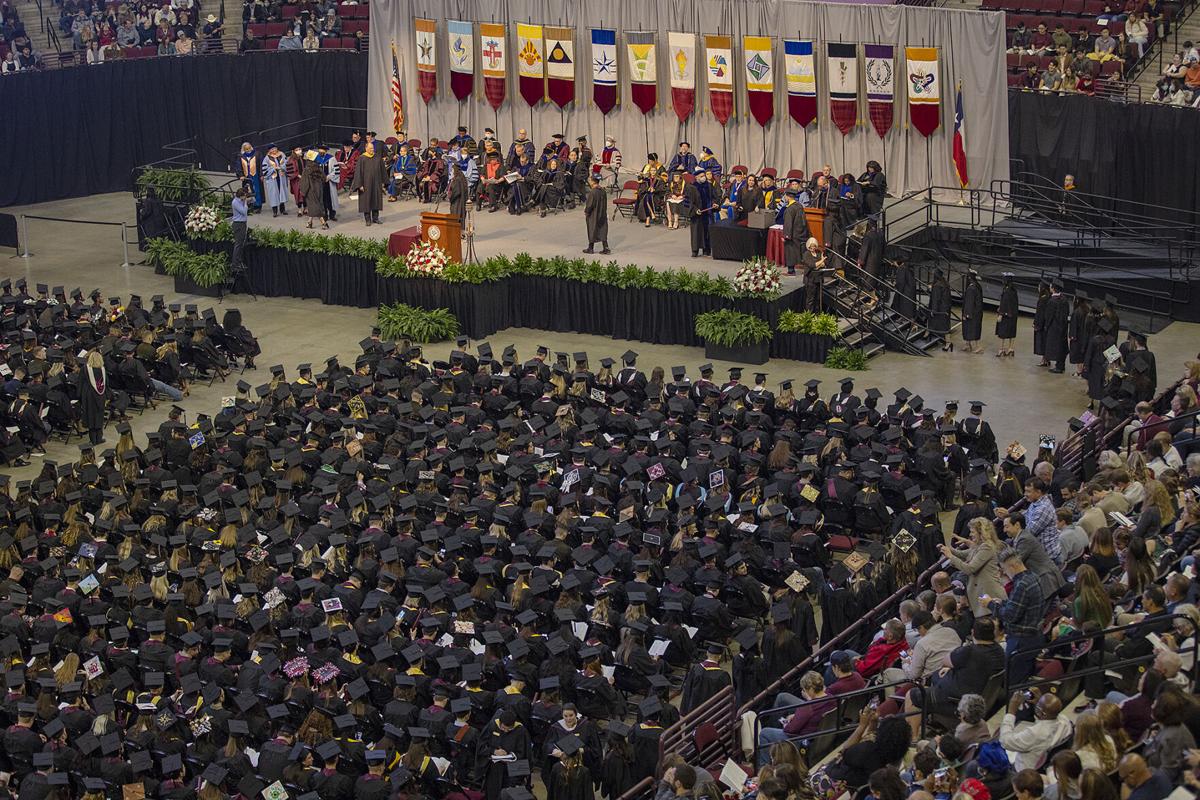 Graduates cross the stage during a Texas A&M commencement at Reed Arena in College Station on Saturday.

Samana Fatima Askari, student speaker at Texas A&M’s Friday afternoon commencement, said since receiving her first items of “former student” gear, she has been pondering the question “now what?”

It is a question other graduates may be asking themselves. In total, approximately 5,504 degrees were conferred to Texas A&M graduates in College Station and Galveston during seven ceremonies.

In her speech, Askari, a third-generation Aggie, said she has found that completing her degree in human resource development is not the end, but instead the first chapter of her adult book – the same for all graduates.

Askari said her time at Texas A&M helped her learn what it means to be an adult and a member of the Aggie family.

Karyna Ballin, student representative graduating with a degree in communications during the Saturday morning commencement at Reed Arena, encouraged all graduates to remember where they came from as they move on to the workforce, military service or further education.

As they move onto the next step, Ballin said looks forward to how graduates continue to make their mark on the world.

They each took different paths to get to Texas A&M and will take different paths moving forward, Gutierrez said, but as members of the same Aggie family will go on to further their education, create “remarkable things” and become entrepreneurs, CEOs, innovators, professors, problem solvers and experts.

Piper Merritt, who graduated Saturday afternoon with a degree in agricultural leadership and development, told her fellow graduates that Texas A&M means something different to each of them, but the spirit of Aggieland lives in each of its alums.

While Texas A&M comes with decades of tradition, she said, it is still a blank canvas for each student.

On Thursday, 540 students graduated from Blinn College during its 144th commencement ceremony at the Brazos County Expo.

Robin Afshar’s degree from the Blinn Bryan campus puts her one step closer to achieving a lifelong dream of becoming a social worker. A non-traditional student, she got married and had a family after high school, enrolling at Blinn only after her children were in school themselves.

She encouraged the graduates to remember those who mentored them and pushed them toward success, saying it was one of her professors who encouraged her to first write her own story of being adopted and caring for her father and grandmother in their final stages of life.

Each graduates’ path is important, Afshar said, as they receive their degrees and certificates.

“If you do not hear this from anyone else, then hear it from me tonight: You have accomplished something great. Your hard work is being rewarded today. I am proud of you. Each and every one of you, I am proud,” Afshar said. “No matter what phase of life you are in, we are all on the journey to achieving our dreams and becoming the person we are meant to be.”

In addition to the thousands who graduated from Texas A&M and Blinn, 35 graduates received their bachelor’s degree through the RELLIS Academic Alliance. While their learning took place in Brazos County, the 35 graduates’ degrees could have come from Stephen F. Austin State University or one of the 10 Texas A&M University System regional university partners within the Academic Alliance.

“We are honored to gather together to celebrate the achievements of this amazing group of graduates,” Texas A&M University System Chancellor John Sharp said. “It is exciting to see bright minds take advantage of the unique educational experience that is the RELLIS campus and we look forward to seeing how they impact their communities for the better.”

Since its founding in 2016, more than 125 students have received bachelor’s degrees through the Academic Alliance.

Get our local education coverage delivered directly to your inbox.