Rents For Single-Family Houses And Apartments Blow Out Across The US: This Crazy-Hot Rent Inflation Is A National Fiasco – WOLF STREET

And it has nothing to do with supply chains. Dear Fed, go have a look at the fruits of your labor.

By Wolf Richter for WOLF STREET.

Market rents for single-family houses and apartments are going haywire, one of the salient features of the current inflationary environment. It has nothing to do with supply-chain snags and factories in China and Russia’s invasion of Ukraine or the price of commodities. This is an inflationary phenomenon that has taken on a life of its own. Landlords – some of them giant companies – believe they can jack up rents, and the giant companies among them tout their ability to do so in their earnings calls. And tenants are paying those higher rents. This is another glaring sign that the inflationary mindset has taken over on both sides. And rental inflation is now in full blowout mode.

Rents of single-family houses across the US jumped by 12.6% in January, according to S&P CoreLogic today, based on the repeat-rent method, which tracks rents of the same rental properties over time.

That 12.6% spike was the fastest meanest year-over-year spike in the data going back to 2004, and the 10th month in a row of record rent increases. Rent increases varied by market and maxed out in Miami with a ridiculous 39% spike year-over-year: 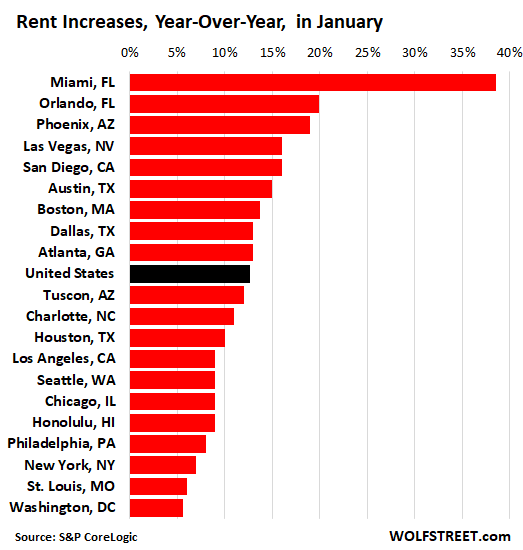 Zillow’s Observed Rent Index, which tracks apartments and single-family houses, spiked by 17.0% from a year ago, by far the highest in the data going back to 2014: 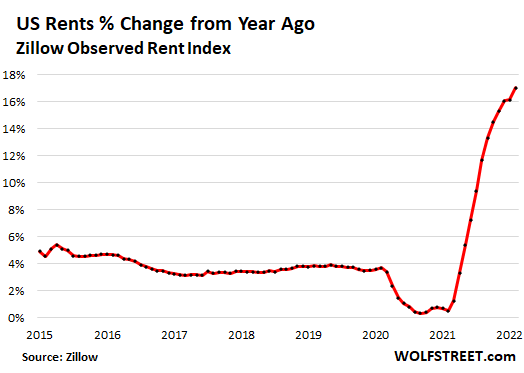 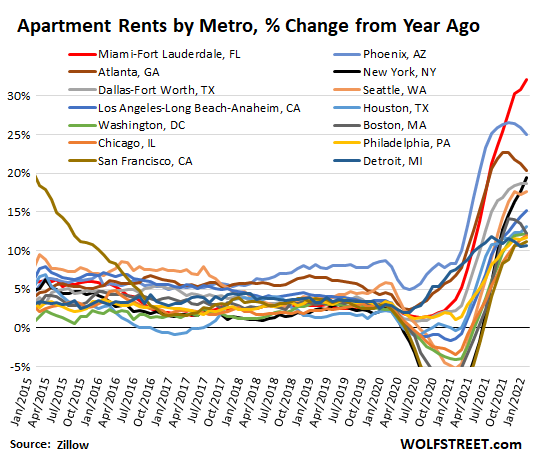 The inflation measure CPI is just starting to pick up the market rent increases. The two measures in CPI that track housing costs in apartments and single-family houses – “Rent of primary residence” and “Owner’s equivalent rent of residences” – have started to rise, but they’re lagging market rents. They will, however, catch up partially with market rents over the next two years and will put large-scale upward pressure on CPI (here is my discussion of this phenomenon).

Those two CPI measures (green and purple lines) have both passed the 4% mark. And they have a long way to go, in comparison to Zillow’s Observed Rent Index (red line): 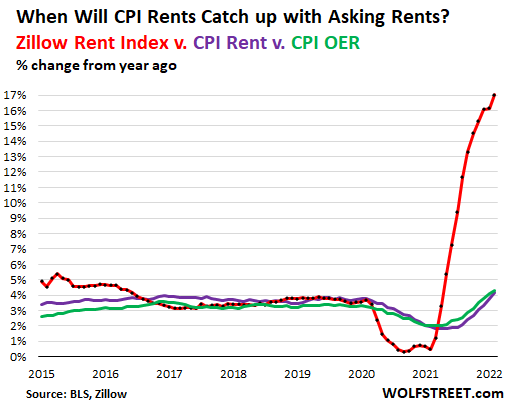 Rent spikes like this are manna for landlords – asset holders, the Fed’s primary beneficiaries – but have devastating consequences for the people who can least afford them.

Granted, many well-to-do people are renting for various reasons, and high-end luxury rentals are a big business. But the vast majority of renters who get hit by those kinds of rent increases have to tighten their belts and spend less in other areas. But prices in other areas are now spiking too, leaving these people in a tough situation.

Enjoy reading WOLF STREET and want to support it? Using ad blockers – I totally get why – but want to support the site? You can donate. I appreciate it immensely. Click on the beer and iced-tea mug to find out how:

Would you like to be notified via email when WOLF STREET publishes a new article? Sign up here.