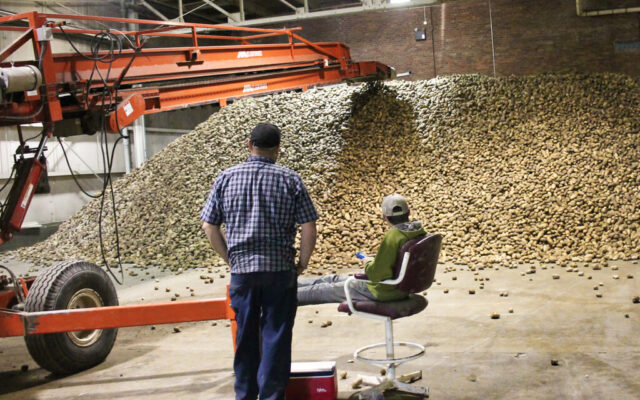 Editor’s Note: The following is the second of two articles highlighting some of the top business stories from 2021. This article highlights events from July through December.

The second half of 2021 saw ribbon cuttings celebrated and the return of popular events like the Northern Maine Fair, Crown of Maine Balloon Fest and St. Apollonia Festival of Trees, along with many fundraisers in The County tradition of paying it forward. Here’s a look at some of the highlights.

The renovation of the Northeastland Hotel continued when IgnitePI received a grant from the Maine Community Foundation’s Start Up/Scale Up program to purchase furniture and equipment for a new workspace and conference rooms.

After collaborating since 2014 to offer the city’s aquatics program at the Gentile Hall pool, the city of Presque Isle and the University of Maine at Presque Isle established a new partnership, with UMPI administering the program and making it available to all area residents.

Katahdin Trust was recognized for having the top-performing campaign this year for the United Way of Aroostook.

The Rusty Krab got a new trailer two weeks after losing its original food stand to a fire.  Rusty Johnston, the owner of the popular seafood stand, was able to reopen after acquiring a new one from the Pangburn family in Easton. 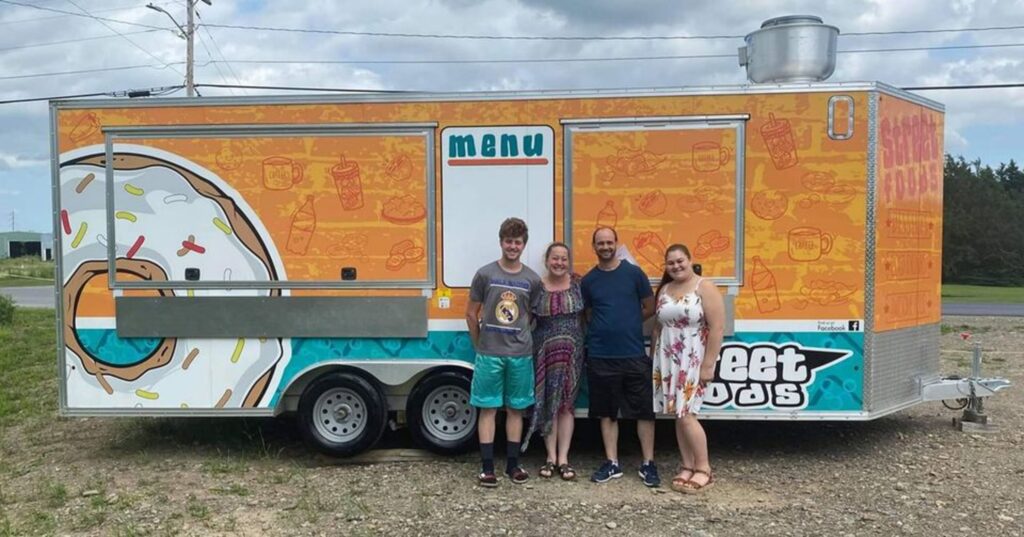 Rusty Johnston (second from right) stands with his family in front of the new trailer he purchased to continue running his seafood stand, the Rusty Crab. (Photo courtesy of Rusty Johnston)

The town of Ashland acquired a 94-acre site to be developed for mixed commercial/industrial use and promises to attract new forest-product businesses.

The University of Maine at Presque Isle’s Donald and Linda G. Zillman Family Professorship for 2021-23 is Kimberly Sebold, professor of history.

Maine Municipal Association presented the city of Presque Isle with a dividend check in the amount of $16,855 because of its good performance and loss prevention programs.

Ignite Presque Isle received a $50,000 donation from Maine Mutual Group that will dedicate the co-workspace and business center at the Northeastland Hotel.

The Central Aroostook Chamber of Commerce celebrated its 30th anniversary with an open house to kick off the Crown of Maine Balloon Fest. The event honored the organization’s history and celebrated 30 years of outstanding community collaboration. 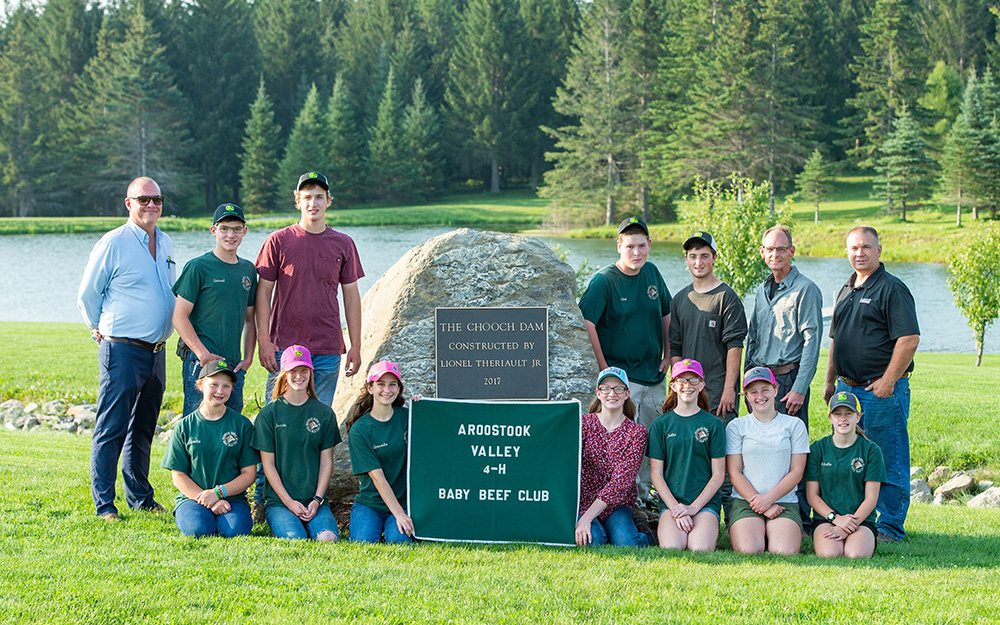 Participants in Aroostook County’s 4-H Baby Beef Auction, held at the Northern Maine Fair, received an additional gift of a $500 donation from Lionel Theriault and Theriault Equipment. Sons Jesse Theriault and Cole Theriault made the presentations on behalf of their father.

Two area businesses supported the Meals on Wheels program of the Aroostook Agency on Aging. Financial and in-kind donations from Percy’s Auto Sales enabled the nonprofit organization to replace the older of two service vans used each week to deliver nutrition services throughout northern Maine. Fort Kent-based Daigle Oil Company donated fuel for the next year for both vans. 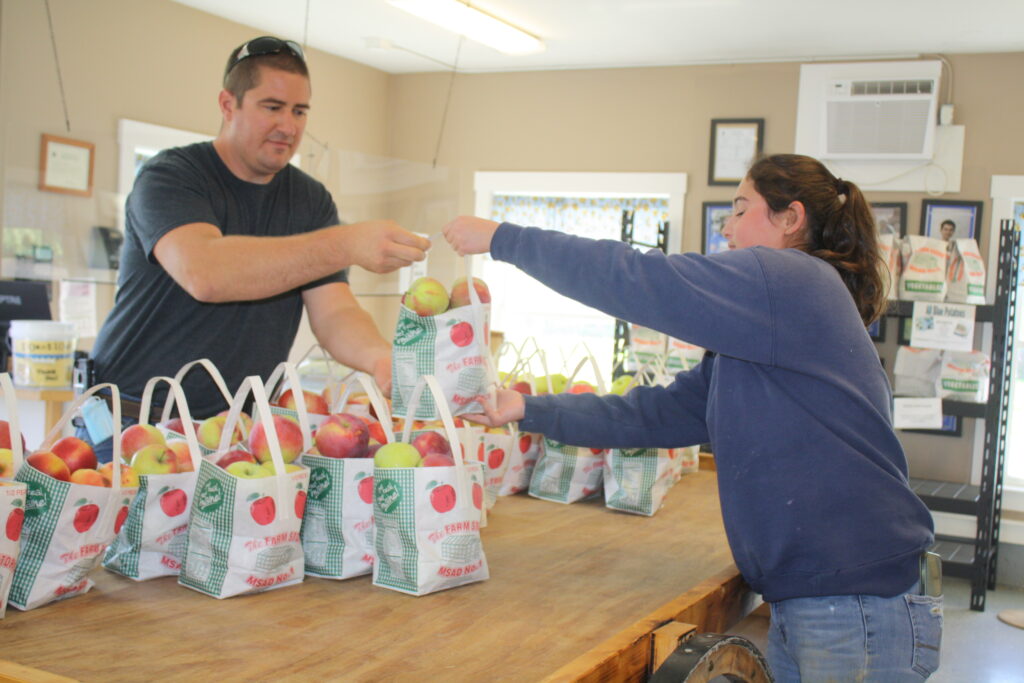 After months of work by many volunteers to sand, cover in fiberglass and paint one of the most recognizable pieces of the Maine Solar System Model, Saturn was returned to its orbit. The planet model was refurbished at Beaulieu’s Garage in Caribou and was reinstalled at its site in Westfield with help from a team at Versant Power.

Though drought threatened and late summer brought warm temperatures, the 25 apple varieties at the SAD 1 School Farm were showing signs of a strong yield. The farm grows apples on 2,900 trees spread out over 14 acres.

Northern Light Dialysis in Presque Isle marked its fifth year in its newest facility. The upgraded space, made possible with the support of community donations, saw additional stations added. The center opened in 1997 and moved to its current space in 2016 as needs increased.

The United Way of Aroostook’s High Five Turkey Drive returned to stuff local food pantries. The drive has brought thousands of dollars to Aroostook County food pantries over the past few years during Thanksgiving.

The Aroostook Agency on Aging marked the grand opening of its Artists for Aging Gallery with featured local artists Lisa Desjardins and John Holub. 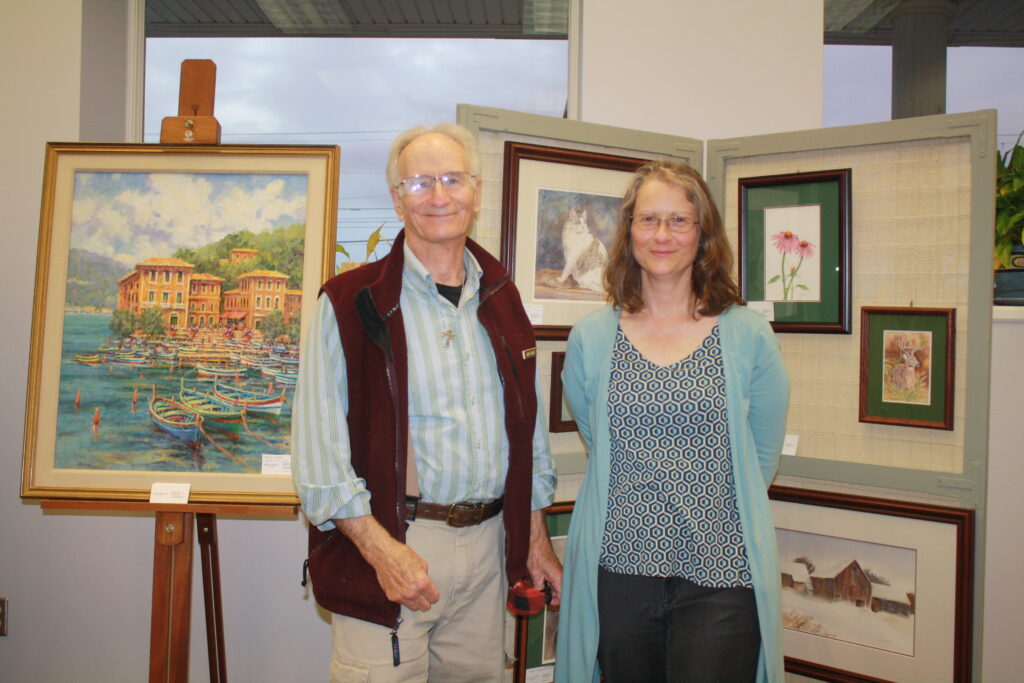 Aroostook County was the perfect place to grow vegetables this season. Farmers not only pulled a record-breaking potato harvest from the ground, but reported a stronger-than-expected yield in a variety of crops including cabbage, beets and squash.

Ignite Presque Isle hired Robert Ottaviano as the food and beverage manager to lead the restaurant, Rodney’s at 436 Main, and events at the Northeastland Hotel. Ottaviano brings 35 years of experience in the food industry, having worked for Aramark to oversee all food and catering needs at Northern Maine Community College for the past 17 years.

County farmers pulled a record potato harvest out of the ground this year, but transportation slowdowns and a driver shortage made it difficult to get the crop to market. With the surprisingly bountiful harvest, the supply was there to meet demand from french fry makers and grocery shoppers, and the potatoes were holding up well. But the industry grappled with supply chain delays, fuel costs and lack of transportation workers. 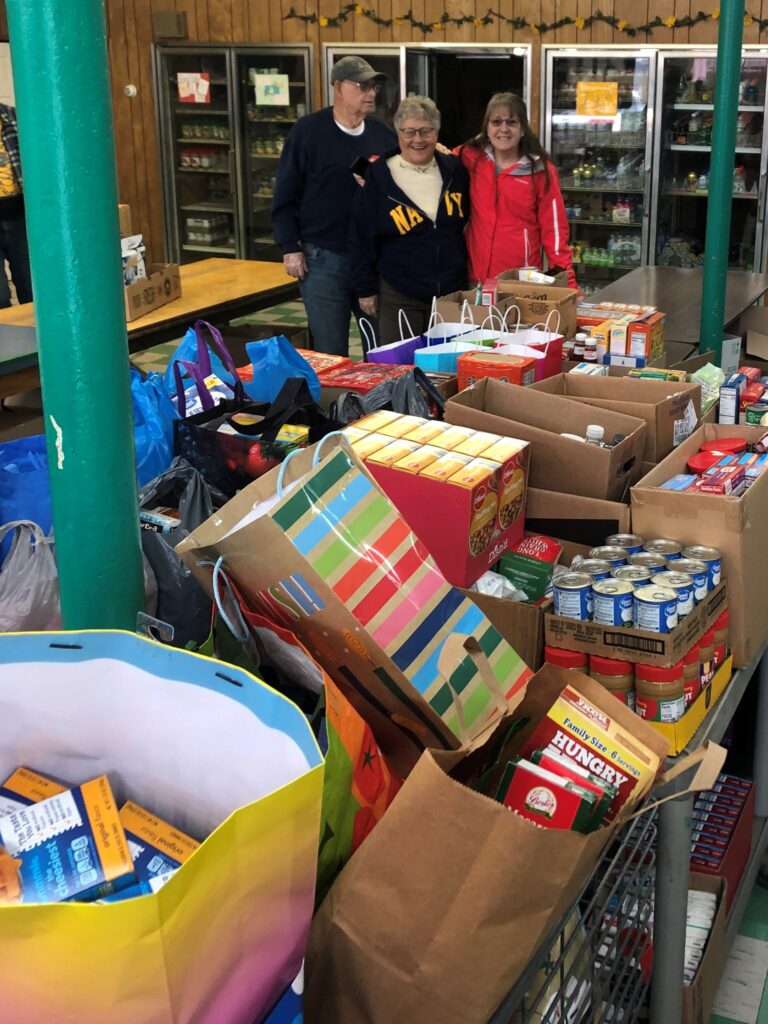 Volunteers Leighton and Barbara Perkins (from left) stand with Cheryl Morris at the Grace Interfaith Food Table site in Presque Isle, as they sort through 2,000 pounds of food donations. Morris hosted a food drive to honor the memory of her son, Adam McDonald, and the resulting ton of food will help the GIFT pantry feed local people in need. (Courtesy of Charlene Buzza)

A food drive to honor a local man brought in 2,000 pounds of goods that will help a Presque Isle pantry feed those in need this winter. Cheryl Morris wanted to honor her son, Adam McDonald, who passed away on April 25 from Duchenne muscular dystrophy, so she decided on a food drive which yielded a literal ton of support.

Maine Veterans Project was the recipient of $2,250 raised during 2021 by employees of Katahdin Trust from Aroostook County to Portland.

Pines Health Services hosted a community-wide COVID-19 vaccination clinic on Nov. 30 at the Caribou Recreation Center. A total of 304 people, including children, attended the three-hour clinic. Nursing students from Northern Maine Community College in Presque Isle helped out at the event.

Wintergreen Arts Center received a $20,000 grant from the Davis Family Foundation to expand after-school and summer arts programs to all area youth regardless of their ability to pay.

A group of local quilters turned leftover pieces of fabric into welcome gifts for those in need. An anonymous donor in Portland gave boxes of fabric to the Acadian Quilters, based in Madawaska. The group started work in October and fashioned quilts, blankets and bibs to be donated around The County, including a local Battered Women’s Shelter and the Pregnancy Care Centers in Fort Kent and Presque Isle, as well as to the Homeless Services of Aroostook Shelter in Presque Isle.

Aroostook County Action Program received a $15,000 donation from Versant Power to support the mission of keeping local residents warm in their homes over the winter. 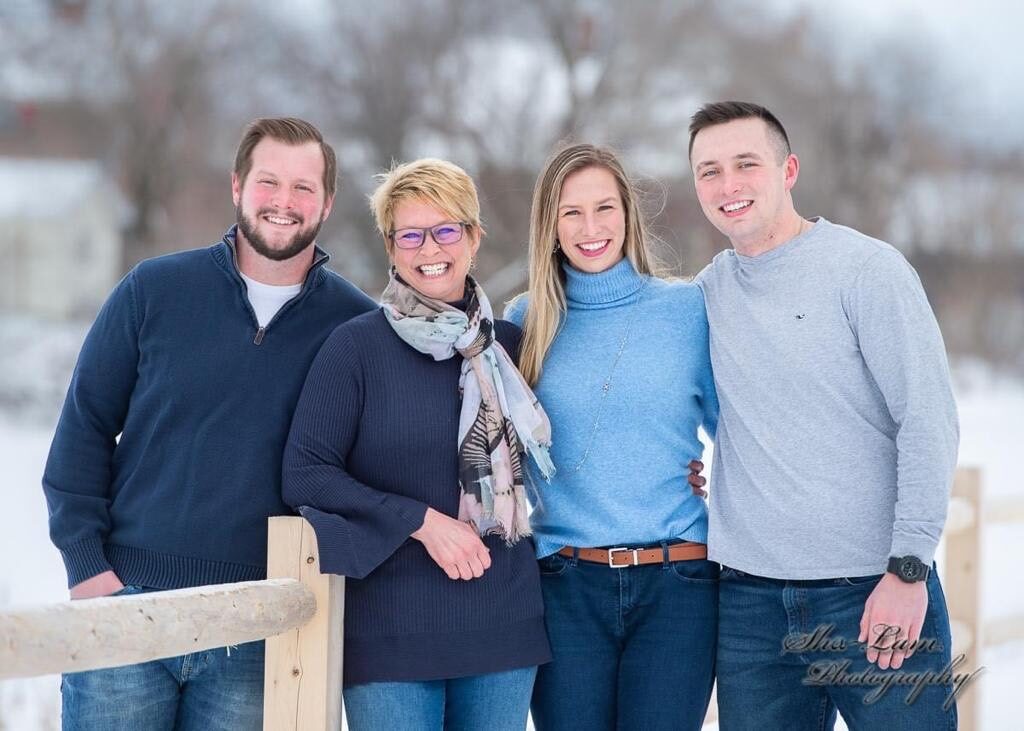 Thanks to a $10,000 donation to the Northern Maine Community College Foundation, a scholarship has been endowed in memory of Melanie Jane Stewart. Melanie passed away in September after a very courageous battle with cancer. Through the establishment of the scholarship, her children, Trey, Meredith and Grant, wish to honor her strength, courage and love.

Thank you for reading your 4 free articles this month. To continue reading, and support local, rural journalism, please subscribe.