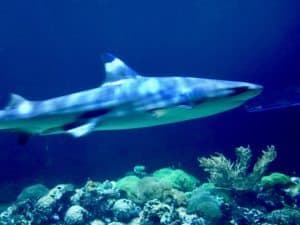 StarSharks, a community-led gaming ecosystem dedicated to players creating, sharing and building together, is pleased to confirm the closing of a $4.8 million private round.

The shark Metaverse will use the proceeds to create “exciting new games and nurture the community,” according to a release.

Prior to the private round, Binance Labs, the VC division and incubator of Binance, had made a strategic investment in StarSharks.

Establised by former star performers from Timi Studio, Google, and Binance, StarSharks is built on the Binance Smart Chain (BSC).

Franky, the CEO of StarSharks stated:

“StarSharks is dedicated to developing a state-of-art blockchain game platform, with the goal of sharing and maximizing the value of creativity through co-creation. We are grateful to be supported by over 30 prestigious institutional investors and communities who believe in StarSharks’ vision, and we look forward to building the game platform of the next generation together.”

The project aims to “disrupt the current GameFi landscape where assets are isolated in one game.”

The announcement also mentioned that players, developers, and investors “can own, mate, and trade the shark NFTs within the ecosystem.” They will also be “able to seamlessly transfer NFTs from one game to another within the StarSharks metaverse,” the update explained.

Users who can’t afford to purchase an NFT have the option to rent one using StarSharks’ NFT leasing feature. The “rent to play” feature will “fully activate the liquidity and utilization of NFT assets.”

As noted in the update, StarSharks (SSS) is a community-driven game platform where players, developers, and investors could “define the value evolution of underlying NFTs in a sustainable ecosystem.”

This project aims to “cultivate and share the value of content with the community, and to disrupt the current GameFi world where assets are isolated in one game.”

It enables players to come together to “build and govern a new metaverse and create a community culture in the Shark-metaverse,” the release noted while adding that StarSharks was “founded in 2021 by a team with previous star performers from Timi Studio, Google, and Binance.’