Web 3.0 is widely considered to be the next frontier of internet technology, making the metaverse a golden macrotrend for retail investors. The metaverse refers to an easily scalable real-time virtual reality or mixed reality world, comprising several interoperable, immersive, and interactive 3D environments. The bulls expect the metaverse to change the way people work, study, and play by enabling synchronous participation by unlimited users. The metaverse is also expected to maintain all relevant information about payments, identity, and history across user sessions.

Many dominant tech players are making meaningful investments in the metaverse. However, Nvidia (NASDAQ:NVDA) and Matterport (NASDAQ:MTTR) have an edge over other would-be entrants and are playing major roles in building the infrastructure supporting the metaverse. Let’s see why these two stocks are attractive long-term picks for retail investors looking to capitalize on the future of the metaverse. 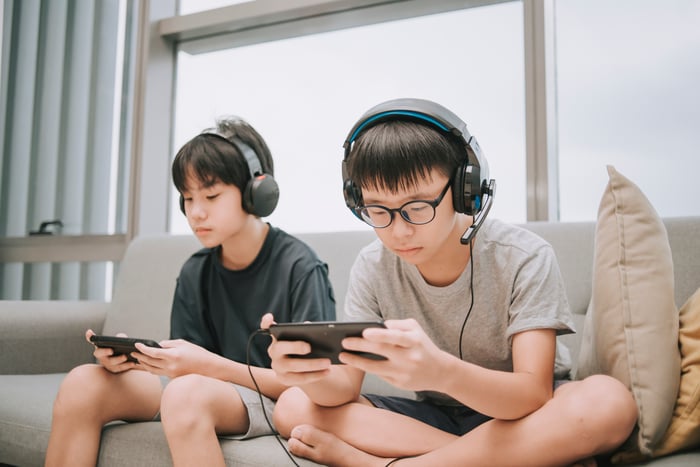 Accounting for 83% of the global PC discrete graphics processing unit (GPU) market share, semiconductor leader Nvidia is poised to provide the parallel processing power (multiple computations at the same time) required to support the huge and complex artificial-intelligence-based workloads for the metaverse.

The company’s high-end GPUs are already in huge demand in the gaming industry, mainly for their ability to render ultra-realistic graphics. Besides GPUs, the company also has a data center-focused Grace central processing unit (CPU) and Bluefield data processing unit (DPU) in its hardware portfolio. These next-generation hardware technologies stand to play a meaningful role in the evolution of the metaverse.

Nvidia is also offering a scalable software platform called Omniverse for creators and engineers to virtually collaborate and create physically accurate 3D simulations of real-time objects, which will be a powerful tool for developing the metaverse. The platform already has immediate applications in areas such as enabling virtual collaboration among 3D designers working on different software platforms, and remote working. Nvidia also sees significant use cases for the Omniverse in creating digital twins (digital simulations) for urban planning, warehouse optimization, and the automotive industry.

The metaverse will undoubtedly be a huge opportunity for Nvidia in the coming years. But even without the metaverse, the company is a highly profitable semiconductor business thanks to huge tailwinds in the gaming and data center segments. The company’s trailing-twelve-month (TTM) revenues were up 64.3% year-over-year to $24.3 billion, while TTM net income has soared by 114.5% year-over-year to $8.2 billion. The company has a strong balance sheet with $19.3 billion cash and $11.8 billion debt.

Nvidia’s share price has more than doubled in the past year. Yet, the stock is well poised for even higher gains as the company’s GPUs remain in huge demand in growing markets such as autonomous driving, cloud computing, and gaming.

Another metaverse stock worth considering for the long haul is Matterport. The company enables users to create digital twins or realistic 3D simulations of physical spaces such as homes, offices, and commercial real estate with an artificial-intelligence-powered application. To date, the company has created simulations for 18 billion square feet of space.

Matterport came to the limelight after it entered into partnerships with tech giants such as Amazon (NASDAQ:AMZN) and Meta Platforms (NASDAQ:FB). Amazon has made Matterport’s digital twin capabilities available on Amazon Web Services (AWS) and together, they created a digital twin solution for Internet of Things (IoT) devices, smart buildings, manufacturing, and industrial customers.

Meta Platforms is also using Matterport’s 1,000 high-resolution 3D simulation models of a range of physical spaces to teach robots to interact with the physical world. After these deals, investors and Wall Street analysts strongly believe that Matterport will be playing a major role in creating the metaverse.

Matterport’s revenues grew by only 10% year over year in the third quarter (ending Sep. 31) to $27.7 million. However, the company’s revenue mix is increasingly shifting toward the higher-margin software subscription business. The company reported 116% year-over-year growth in subscribers to 439,000. Matterport is not yet profitable (which is not unusual considering that early-stage tech companies usually focus first on market share). However, this may change once enterprises realize the commercial potential of digital twins, and more subscribers convert into paying customers.

Matterport’s digital twin technology currently has several real-world applications. In real estate, real estate brokerages and real estate portals use digital twins to organize virtual 3D tours to improve online engagement and visitor conversions. In insurance, digital twins are used for documenting and maintaining records about the condition of a property, which can then be used for claims management.

Matterport’s annual revenue run rate is currently only $111 million . The company is targeting an addressable market for digitizing the built world estimated to be worth $240 billion. Much of the current hype around this stock, however, is centered over its future growth potential in the metaverse, which comes with significant execution risk. Yet, considering the many underexplored applications of 3D simulations of the real world, I believe that Matterport can reward patient investors with attractive returns in the coming decade.

This article represents the opinion of the writer, who may disagree with the “official” recommendation position of a Motley Fool premium advisory service. We’re motley! Questioning an investing thesis — even one of our own — helps us all think critically about investing and make decisions that help us become smarter, happier, and richer.